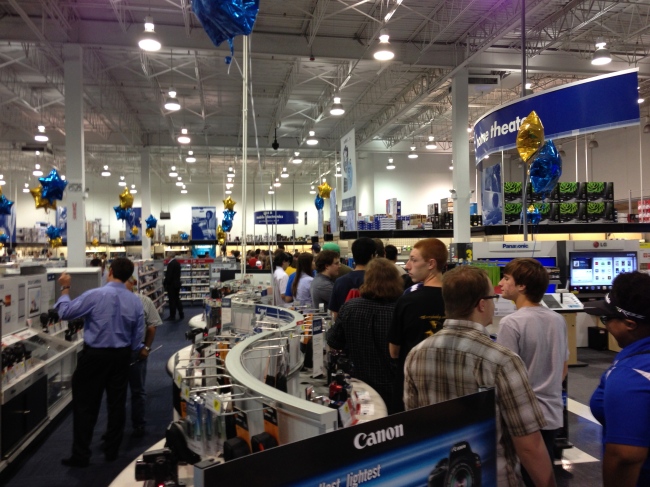 I attended the E3 2013 Nintendo Experience tonight, and I want to share some impressions of both the games and my experience. If you just want to read some quick thoughts on the games, skim down a few paragraphs to check out my thoughts, but if you have any interest in attending the event later this week, I’d recommend reading my impressions of it as well.

The closest Best Buy doing the event is about 80 miles from where I live, so it was a bit of a trip to get there, but not too bad. The event started at 4 and I was done working (I’m teaching summer school) at 12:45, so I had plenty of time to get out there and I made sure to be there right at 4. This turned out to be an extremely poor choice, and if any of you are planning on attending on Saturday, I strongly suggested showing up at least an hour early. 20 minutes after I arrived I was already talking to people about the demos they played, and they had gotten there 1-2 hours early. That may seem like a long time, but I ended up spending almost 4 hours at Best Buy, so I think the quickest way to get some hands on time with one of the games is to budget your time to line up before the event starts.

In any case, once I was on site I queued up in a long line and waited for a chance to try out the demos. I was actually really surprised by the excellent turnout; there were easily 200 people there throughout my time (rough estimate). The Nintendo reps did a reasonable job of funneling people through the store and they had a loose system in place for recording names and games and keeping track of each person’s turn. However, Nintendo unfortunately only had one console on hand for playing demos, so things moved quite slowly.

I waited in a line that wrapped around the media section of Best Buy for about two hours before getting up to the demo area. Once I arrived there, I would still end up waiting almost two more hours to play my demo, but I at least had a semi-clear view of the demos, so I had a chance to see gameplay and start making impressions.

The Wind Waker demo offered the choice to play two different sections of the game. One was the opening segment on the island when Link starts out in a tower and drops down to explore his surroundings and start his adventure. The other was a boss fight with a bird (too tired to look up the details right now). Each of these demos took close to ten minutes to play, so it is the best one to choose to maximize your play time and also the suffering of those waiting in line. Wind Waker is absolutely stunning in person. The game has always been beautiful, but it is so bright, sharp, and vibrant on Wii U that it exceeded my expectations by a large degree. The game appeared to handle well and it ran smoothly, so there isn’t much to say outside of the fact that the presentation is absolutely astounding.

I also had the chance to see a few turns of Donkey Kong Country, though it was by far the least played demo at the event. It also looks quite nice, but beyond the HD visual upgrade, the demo didn’t show off much to separate the game from its predecessor. More thorough impressions are surely easily found online from those who had the chance to play it at E3, but if you’re a fan of the Wii game, this appears to be a great looking follow up that appears to run very smoothly on Wii U.

Super Mario 3D World was perhaps the most popular demo tonight, and the reps made sure to have two people playing each time they ran the demo. The game appears to really shine as a multiplayer experience, and from what I could tell it seems to be even more focused on that aspect than the Wii and Wii U versions of the New Super Mario Bros. games. Multiple levels were playable, though most players seemed to choose the same one. That level was designed around the new cat suit mechanic, featuring lots of scalable walls and platforms. Everyone who played the game seemed to really enjoy it, and I’m hoping it will be the best Mario multiplayer experience yet. I should also mention that the game looks crisp, colorful, and bright; those suggesting it looks unimpressive or displays too much of the series’s portable roots are mistaken. It will impress visually.

Finally, Mario Kart 8. I chose to play this game because I thought it may demo the best of the games featured, though after playing it I’m not really sure that’s true. Again, the game looks beautiful (I am really enjoying seeing these colorful and cartoonish Nintendo worlds rendered in HD), and it plays very much like recent games in the series. The anti-gravity/hover mode touted in the game’s trailer is part of this demo, but I must say it doesn’t add much (at least not on the very basic track playable tonight). Because the camera stays for the most part locked on your kart, it is almost difficult to notice the track winding around or becoming more vertical. I’m hopeful this feature will become more exciting and more interestingly used in later tracks in the game, but I walked away from the demo feeling like the game is a very conservative upgrade from Mario Kart 7. The gamepad functionality is all but useless at this point, but there is of course still time for that to change before the game comes out next year.

The E3 2013 Nintendo Experience at Best Buy took up roughly seven hours of my day, driveway to driveway. I’m not sure I can recommend the event to anyone who may need to make a similar time comment, but it was truly exciting to see these games running in person, especially if you share my lack of experience attending E3 or other events that offer similar opportunities. Here’s hoping Nintendo will continue to hold these types of events in the future (and maybe bring a few more consoles with them as well).