While I’ve written about many Sega 3D Classics individually, here I’m just looking at the first retail collection of the series. Sega 3D Classics are simply the best versions of classic Sega titles, with stunning 3D effects and a plethora of options for both hardcore retro enthusiasts and those playing the games for the first time.

This collection includes Space Harrier, Fantasy Zone Opa-Opa Bros. (the first game in the series), OutRun, Bare Knuckle (Streets of Rage), The Super Shinobi II (Shinobi III), Ecco the Dolphin, and two more games I’ll get to in a moment. Since these 3D classics have been out for a while (in Japan at least- we’re still waiting on OutRun and Fantasy Zone here), and I’ve talked them to death on this podcast, I’m just going to focus on the package itself. Starting with the actual package. 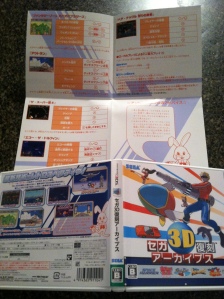 As you may know, the art for this collection was done by original Pokemon artist Ken Sugimori. I love his work here, especially his depiction of Blaze from Bare Knuckle. 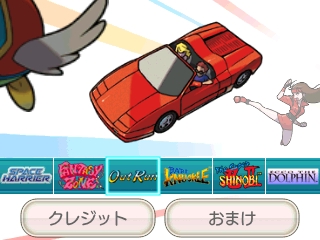 Inside the box is a standard one sheet instructions. A cool little touch is the appearance of Professor Asobin, whom we’ve seen recently on Sega Hard Girls.

Another addition is the credits sequence, which is absolutely bonkers classic Sega fanservice.

In case you can’t tell, this is Ecco the Dolphin stealing the OutRun car

The most significant addition to this collection however, are the Sega Mark III (Master System) 3D versions of Space Harrier and OutRun. These 8-bit ports were among the few games to actually support the Sega 3D Glasses. While the games are pretty much a curio here (the proper versions on the collection are far superior), they do sport some pretty thoughtful additions. Obviously, they are playable in 3D, but there is another really nice touch in the options. 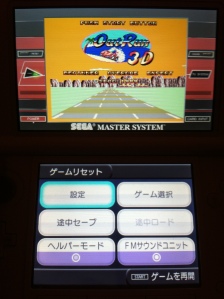 In the lower right corner of the options menu, you can select “FMサウンドユニット.” This is the FM Sound Unit, a device for the Sega Mark III which “enhances the sound output of certain Mark III games.” Switching between the original and FM sound is an awesome feature for 80s game music enthusiasts such as myself.

As someone who loves M2, Sega, 3DS, gaming history, and Ken Sugimori, this collection was an absolutely essential purchase for me. I’d highly recommend it to anyone with a Japanese 3DS and appreciation of classic games and hardware, as collections with this much love and care put into them are few and far between.