Nintendo is doing another holiday mall tour this year, the Nintendo Switch Holiday Experience 2018, and luckily one of the 11 locations they’re setting up residence in is just about an hour from where I live in Schaumburg, Illinois (just outside of Chicago). We needed to make a trip to Whole Foods for some vegan Thanksgiving food anyway and it’s right next door, so we decided to not kill any birds all with one stone and make a day of it. 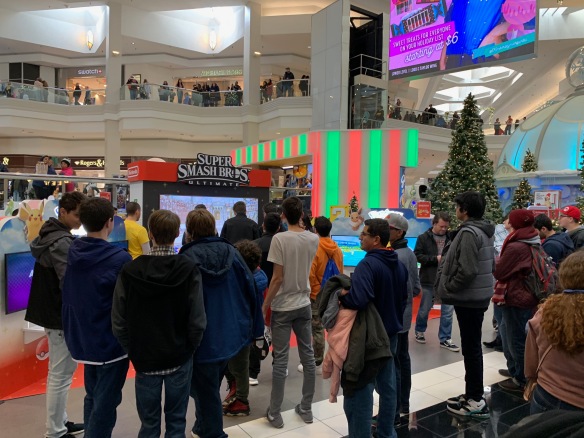 The event was really cool, but also today was probably not the best day to check it out. There was a celebrity make-up artist doing a signing of some kind at the Woodfield Mall today and the place was PACKED. Plus today was the launch day of the Switch Holiday Experience (which runs from now until December 16th), so it was maybe the busiest day of the event’s entire run.

Still, once Ryan texted me and let me know it was happening in my area, I had to go and I’m definitely glad I did. The primary attraction is Super Smash Bros. Ultimate and that’s actually the only game I played. We waited in line for probably 90 minutes to get less than five minutes of game time, but that’s roughly what I expected and it was super cool. I played as Simon Belmont, my son Owen played as Incineroar, and he actually finished in second place in our four player battle. Every character was unlocked and available to play, and I’d imagine if you’re able to check out the event on a Tuesday afternoon or something, you could spend plenty of time checking it out. 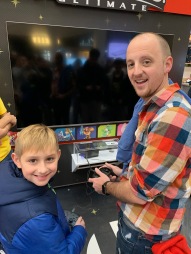 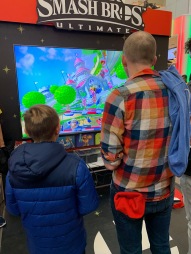 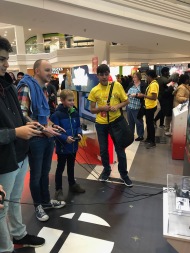 Other games being demoed include Overcooked 2, Super Mario Party, Just Dance 2019 and the Labo Vehicle Kit. Pokemon: Let’s Go Pikachu and Evee will be playable too, but not until November 16th which is when they launch anyway. 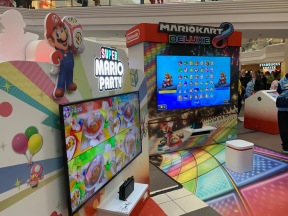 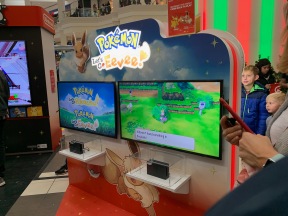 As an added bonus, My Nintendo members can check in with their QR codes and receive a gift like stickers, bags, posters, or even $20 eShop cards. I walked away with a sticker set and Owen bagged a MyNintendo pop-socket, so while the giveaways aren’t terribly exciting, they’re still worthwhile.

Check out Nintendo’s site for a list of Switch Holiday Experience locations; if you’re lucky enough to have one nearby it’s definitely worth stopping by, though I’d recommend learning from my mistakes and waiting for a less crazy day at the mall to check it out for yourself. 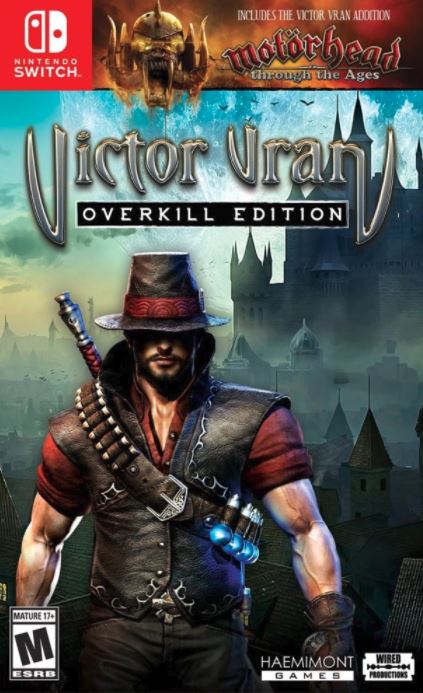 Left-click here to listen in your browser or right-click, then “save link as…” to download the episode!

Buy an ~official~ Nintendo Fun Club Podcast shirt and be the coolest geek-punk at the skatepark!

Code of Princess EX Coming to Switch This Summer!

If You Like Switch Shmups, You’ll Want This Vertical Grip

Ray Rocket – Do You Wanna Go To Tijuana?

Support us and cool artists by buying a shirt from this link!

The Best Nintendo Sites in the Whole World

Sega Sometimes Does What Nintendo Does Not